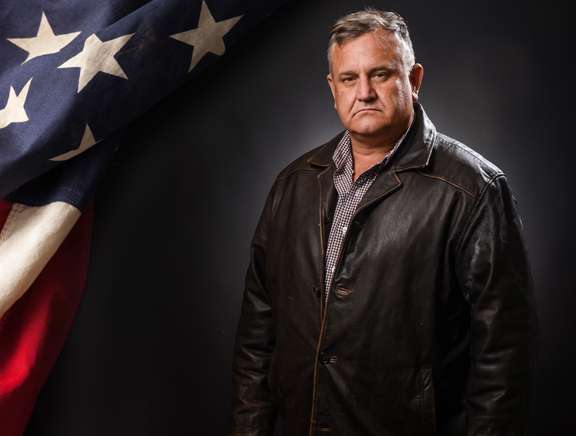 It’s the sounds, smells and sudden noises that take him back. A bump here, a ringing cell-phone there provokes a violent jump. Memories. A question is met with a 1,000 yard stare and a long wait for a response. Answers quickly become tangents, memories come together and rapidly drift apart – recollections become a graphic and sad stream of consciousness, impossible to comprehend unless you lived it and nearly died as a result.

Blake Settle graduated from Westport High School in 1981. He went to the University of Kentucky. He worked for Disney out of college and raised a family. Blake Settle also became Lt. Col. Settle – a 30 year Army veteran. Deployed six times, a two-time recipient of the Bronze Star and a Purple Heart, Settle is now back home, at last back in his native Elizabethtown for good. Blake Settle suffers from Post Traumatic Stress Disorder (PTSD) and has traumatic brain injury – two signature afflictions of post 9/11 warfare in the U.S. military.

On Oct. 15, 2011 five assailants rammed a car packed with explosives into the gate of Forward Operating Base Lion, Settle’s base deep in the Panjshir Valley of Afghanistan. For half an hour several of the attackers peppered the base where, with rocket propelled guns, and a prolonged firefight broke out. When the carnage came to a close, Settle had been hit in the leg with shrapnel, but didn’t realize he was hit until he felt a wet sensation in his boot. He kept going.

Two weeks later, when driving with his translator he crashed his vehicle into a wall. He suffered a broken hand and a severe concussion. He had kept going for too long. He was going back home.

“You’re programmed to keep going, and you don’t know when to take a knee,” explains Settle. He pauses. “I should have taken a knee a long time ago.”

“It’s fulfilling,” explains Lori Young, a high school friend who has been assisting with Settles’ care with fellow school friend Beth Powell. “But there was never a question that we wouldn’t help. If we were ever in trouble Blake would be the first person to help us, so Beth and I want to do this.” 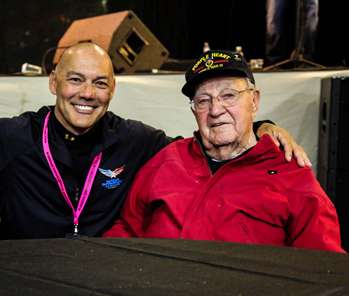 “We have his medical power of attorney, and we help him to organize his appointments and his care.”

“Blake is humble and would never make it a big deal, but the reason why he does these interviews is because he wants others to get care. One of his greatest pride as an officer was that he never lost any of his own men. He wanted to take care of his men, and get them home safe, but some of the stories that you hear are worse than your worst nightmares.”

“I was around a lot of old Soviet equipment that was toxic. They [the Soviets] would just dump stuff anywhere,” recalls Settle. “I ended up getting a tumor and having my thyroid taken out. I take medication for that. Sleeping is a big thing. It’s a racing mind. Things that have happened that would be considered a trigger, I try to address early. Those times are not good ones to walk down this side of the road or go into this particular neighborhood. It can put you in a compromising position, and it’s best to stay away. It becomes hard to process and connect the dots. The goal is to find ways in which they can assist you. You try to surround yourself with artifacts, or people or places that can help you. Not enable you, but facilitate a healthy recovery and ensure you’re on the right path.”

For someone like Mike Greenwell, founder of the Warrior Empowerment Foundation, Settle’s case is a classic one he’d like to see solved, or at the very least addressed in a more meaningful way than it has been in the past. Greenwell, owner of Titan Marine in Prospect, a company that has numerous contracts with the Department of Defense, said his tipping point came when too many colleagues, acquaintances and business associates were going to Afghanistan and Iraq and either coming back with life-altering mental and physical injuries or not coming back at all. The solution was to start the Warrior Empowerment Foundation two years ago and try to raise money that could be directed to good causes in the community.

“We had very humble beginnings and we didn’t have any lofty goals. Our first event was last year and we wanted to raise around $10,000,” explains Greenwell. “But we actually raised close to $122,000 right out of the gate – it blew us away. The level of support in the community has been fantastic and it has taken on a life of its own that we just had not anticipated. It was a real community event.”

And with 15 people on the board of directors and no salaries being paid out, Greenwell and his colleagues are able to donate every single dollar that they raise to their desired causes. At this year’s event the funds exceeded $150,000.

One highlight of this year’s event was the meeting between Settle and fellow Kentucky veteran, L.C. Power – a 98-year-old WWII veteran, who landed on D-Day, fought through battles during the war, including Battle of the Bulge and was awarded the Bronze Star (like Settle) for bravery. In fact this year’s event was the first at which Greenwell and his colleagues introduced the L.C. Power Gift of Gratitude award, which Settle, who was honored this year was a recipient of.

“We wanted to set up a grant program in his name and we’ll seek out local veterans from all conflicts, veterans who need help,” Greenwell explains. “What I want to stress is that with us it’s not just about throwing money at a problem. What we really want to do is to use a combination of the funding that we receive, but what we really want to do is put people in motion. We want to create situations where people who want to help, but don’t otherwise know how to help, can get involved.”

“For example, next year we want to create projects for which people can sign up,” Greenwell continues. “So, we want attorneys, we wants life coaches, we want financial coaches, construction professionals and people like that so that we can involve the community not just from a dollar perspective, but put things in motion for these veterans.”

As for Settle, he dreams of moving on, finding a mental and physical calm in the future where he can work on his own projects and involve others like him. He wants to build cabins. “I want to get veterans involved and teach them four basic skills – landscaping, architecture, carpentry, masonry. That way they can go home and build a cabin in their backyard, their own space. Perhaps we could build several cabins and host pain management classes in them, therapy. I went through a dog-handling class with the army, so I could have a dog. This way, veterans don’t have to be in occupational therapy in a hospital. You can send them out there, get them dirty and involved in the process, because everyone has something to offer.”

For Settle, his own journey centers on the help he is getting from his own friends.

Settle knows this is invaluable for his survival and well-being. He just hopes others can get the same help and support that he’s been lucky enough to receive.

He pauses once more and reflects.