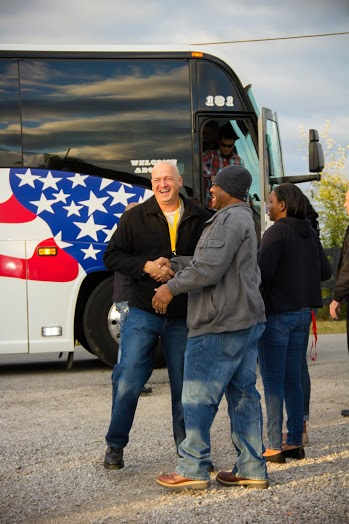 As they got off the bus and their families made their way through the crowds, every person letting them know how much they’re appreciated.

First Sgt. Robert McGuire, who has served 27 years in the Army, said the reception was overwhelming.

“It’s incredible. It’s great to have the people of the area, the community, still have faith in the soldiers, and respect and appreciation for the soldiers,” he said.

Mike Greenwell, owner of Titan Marine, set up the tribute to troops last year with the Warrior Empowerment Foundation.

Along with the welcome home, they put on a silent auction.

Proceeds from numerous items went toward supporting Wounded Warriors past and present.

“The motorcade picked them up. They said, ‘OK, that’s different.’ They get here and there’s a thousand people screaming and going nuts for them. It was just so gratifying to be able to do something like that for them,” Greenwell said.

The veterans were also treated to good food and live music.

Many were reunited with fellow servicemen and women.

Settle suffered a traumatic brain injury during his years in combat.

He said the event is inspiring.

“The real healing starts at events like this. When they embrace their communities and the communities embrace them,” Settle said. “I’m home, with my family and a lot of people didn’t get that opportunity.”

“It’s a great feeling when someone stops you and shakes your hand and thanks you for your service,” McGuire said.